Windows 10 S is a specific configuration of Windows 10 Pro that offers a familiar, productive Windows experience that's streamlined for security and performance. Windows 10 S will only run software that is vetted to be safe. It will provide enterprise grade protection from threats on the Internet and in the Cloud.

Macros automate frequently-used tasks; many are created with VBA and are written by software developers. However, some macros pose a potential security risk.

In order to help keep our users safe, Office on Windows 10 S is configured, by default, to block macros in documents received from the Internet. Some of those scenarios could include:

Office uses the security zone information provided by Windows to determine if macros should be blocked. For example, if the document comes from a location that is considered to be in the internet zone by Windows, then macros are disabled in the document, and the user sees the following notification:

Note: You don't have to enable macros in order to view or edit the document. Only if you want the macro functionality.

To enable macros you will have to have saved the file you want to unblock to a local hard drive or OneDrive. Open Windows File Explorer and find the file that you want to unblock. Right-click the file and choose Properties from the context menu. At the bottom of the General tab you should see a section for Security. Select the Unblock checkbox. 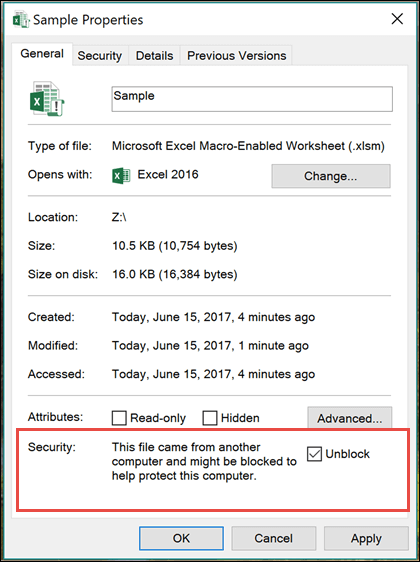 The file should then be accessible from there normally.

This article was last updated on February 23rd, 2021 as a result of your comments. If you found it helpful, and especially if you didn't, please use the feedback controls below to let us know how we can make it better.