Abstract:    This is the second tutorial in a series. In the first tutorial, Import Data into and Create a Data Model, an Excel workbook was created using data imported from multiple sources.

In this tutorial, you use Power Pivot to extend the Data Model, create hierarchies, and build calculated fields from existing data to create new relationships between tables.

The sections in this tutorial are the following:

At the end of this tutorial is a quiz you can take to test your learning.

This series uses data describing Olympic Medals, hosting countries, and various Olympic sporting events. The tutorials in this series are the following:

We suggest you go through them in order.

In this section, you use the Microsoft Office Power Pivot in Excel 2013 add-in to extend the model. Using Diagram View in Microsoft SQL Server Power Pivot for Excel makes creating relationships easy. First, you need to make sure you have the Power Pivot add-in enabled.

When Power Pivot is enabled, you see a ribbon tab in Excel 2013 called POWER PIVOT. To enable Power Pivot, follow these steps.

The Excel ribbon now has a POWER PIVOT tab.

It's nice when the data in your Data Model has all the fields necessary to create relationships, and mash up data to visualize in Power View or PivotTables. But tables aren't always so cooperative, so the next section describes how to create a new column, using DAX, that can be used to create a relationship between tables.

To establish a relationship between the Hosts table and the Data Model, and thereby extend our Data Model to include the Hosts table, Hosts must have a field that uniquely identifies each row. In addition, that field must correspond to a field in the Data Model. Those corresponding fields, one in each table, are what enables the tables' data to be associated.

Since the Hosts table doesn't have such a field, you need to create it. To preserve the integrity of the Data Model, you can't use Power Pivot to edit or delete existing data. You can, however, create new columns by using calculated fields based on the existing data.

By looking through the Hosts table, then looking at other Data Model tables, we find a good candidate for a unique field we could create in Hosts, and then associate with a table in the Data Model. Both tables will require a new, calculated column in order to meet the requirements necessary to establish a relationship. 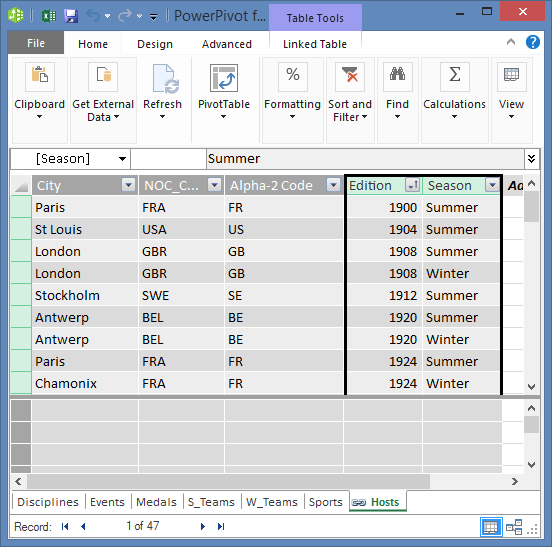 Let's start with the Hosts table. The goal is to create a calculated column in the Hosts table, and then in the Medals table, which can be used to establish a relationship between them.

In Power Pivot, you can use Data Analysis Expressions (DAX) to create calculations. DAX is a formula language for Power Pivot and PivotTables, designed for the relational data and contextual analysis available in Power Pivot. You can create DAX formulas in a new Power Pivot column, and in the Calculation Area in Power Pivot.

The Hosts table is ready. Next let's create a calculated column in Medals that matches the format of the EditionID column we created in Hosts, so we can create a relationship between them.

The next step is to create a relationship between Hosts and Medals.

Next let's use the calculated columns we created to establish a relationship between Hosts and Medals.

In this section, you learned a new technique for adding new columns, created a calculated column using DAX, and used that column to establish a new relationship between tables. The Hosts table is now integrated into the Data Model, and its data is available to the PivotTable in Sheet1. You can also use the associated data to create additional PivotTables, PivotCharts, Power View reports, and much more.

Most Data Models include data that is inherently hierarchical. Common examples include calendar data, geographical data, and product categories. Creating hierarchies within Power Pivot is useful because you can drag one item to a report – the hierarchy – instead of having to assemble and order the same fields over and over.

In this section you create two hierarchies within the Olympic data you've been using in this tutorial. You then use these hierarchies to see how hierarchies make organizing data easy in PivotTables and, in a subsequent tutorial, in Power View.

Your Data Model now has hierarchies that can be put to good use in reports. In the next section, you learn how these hierarchies can make your report creation faster, and more consistent.

Use hierarchies in PivotTables

Now that we have a Sports hierarchy and Locations hierarchy, we can add them to PivotTables or Power View, and quickly get results that include useful groupings of data. Prior to creating hierarchies, you had to add individual fields to the PivotTable, and arrange those fields how you wanted them to be viewed.

By dragging those two hierarchies, you quickly created a PivotTable with interesting and structured data that you can drill into, filter, and arrange.

Now let's create the same PivotTable, without the benefit of hierarchies.

The screen looks similar, except that you dragged seven individual fields into the PivotTable Fields areas, instead of simply dragging two hierarchies. If you're the only person creating PivotTables or Power View reports based on this data, creating hierarchies might only seem convenient. But when many people are creating reports, and must figure out the proper ordering of fields to get the views correct, hierarchies quickly become a productivity enhancement, and enable consistency.

In another tutorial, you learn how to use hierarchies and other fields in visually engaging reports created using Power View.

Review what you learned

Your Excel workbook now has a Data Model that includes data from multiple sources, related using existing fields and calculated columns. You also have hierarchies that reflect the structure of data within your tables, which make creating compelling reports quick, consistent, and easy.

You learned that creating hierarchies lets you specify the inherent structure within your data, and quickly use hierarchical data in your reports.

In the next tutorial in this series, you create visually compelling reports about Olympic medals using Power View. You also do more calculations, optimize data for fast report creation, and import additional data to make those reports even more interesting. Here's a link:

Want to see how well you remember what you learned? Here's your chance. The following quiz highlights features, capabilities, or requirements you learned about in this tutorial. At the bottom of the page, you'll find the answers. Good luck!

Question 1: Which of the following views let you create relationships between two tables?

A: You create relationships between tables in Power View.

B: You create relationships between tables using Design View in Power Pivot.

D: All of the above

Question 2: TRUE or FALSE: You can establish relationships between tables based on a unique identifier that is created by using DAX formulas.

Question 3: In which of the following can you create a DAX formula?

A: In the Calculation Area of Power Pivot.

B: In a new column in Power Pivotf.

Question 4: Which of the following is true about hierarchies?

A: When you create a hierarchy, the included fields are no longer available individually.

B: When you create a hierarchy, the included fields including their hierarchy can be used in client tools by simply dragging the hierarchy to a Power View or PivotTable area.

C: When you create a hierarchy, the underlying data in the Data Model is combined into one field.

Notes: Data and images in this tutorial series are based on the following:

Your report width is greater than the page width [MS]

Your report width is greater than the page width Access for Microsoft 365...